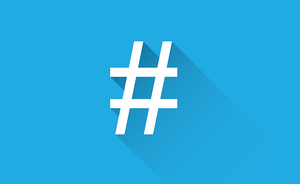 In the past decade, hashtags have gained quite a bit of attention on social media platforms such as Twitter, Facebook, Google+, Instagram, and Pinterest. A hashtag is a word or a phrase that lacks spacing that is prefixed with the unique hash character, which is nothing more than a number sign.

The hashtag forms a label and is a special type of metadata tag that assists in organizing content, tracking discussions based on the keyword or keyword phrase used, and transforming the word or phrase into both a clickable and searchable link.

If you are searching for social media tips that will assist you in attracting more attention and traffic, you will find that the use of hash tags is a positive and productive option when it comes to social media marketing campaigns.

In this brief guide, you will learn the basic history of hash tags and how to use hash tags in order to attract the attention that you desire on the World Wide Web.

History of the Hash Tag

In the earliest days of the hash tag, the social media symbol was only found on Twitter; however, since its original appearance, its use has extended to other social-based platforms. In the year of 2007, the developer named Chris Messina originally proposed in a tweet on the platform Twitter that the social media website start using hash tags in order to group topics.

Initially, the idea was rejected. Later that year, during the month of October, citizen-based journalists that were covering forest fires occurring in San Diego started to tweet updates and utilized the has tag, “#SanDiegoFire”. Once this started, hash tagging immediately gained an immense amount of popularity.

Now, internet users, businesses, organizations, and a wide array of other brands and industries utilize hash tags. If you want to attract more attention and want to increase your traffic, you should utilize hash tags, too!

Understanding the Value of the Hash Tag

In reviewing social media tips, you will find that hash tags are exceptionally beneficial because of the true value that they possess.

In order for hash tags to attract more attention on the World Wide Web and increase traffic, you must first gain an understanding of the value that these amazing little searchable and clickable links provide:

Based on the two value points outlined here, you can clearly see that hash tags build value by expanding your reach and attracting internet users that are outside of your network.

If you are ready to expand your reach, attract more visitors, and optimize your success in the virtual world, it is imperative that you immediately consider the benefits associated with the utilization of hash tags. For more information on the success of hash tags and social media tips, visit the following guides today:

Ready to Build Something Great?

Team Up with a company that CARES about your business and UNDERSTANDS your needs in a website.

WEB DESIGN CONTENT MARKETING ECOMMERCE
Team Up with a company that CARES and Understands YOUR NEEDS in a Website. LET'S BUILD SOMETHING
GREAT TOGETHER